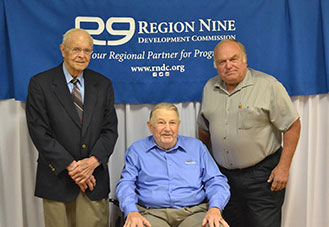 Berg served as Brown County commissioner for 17 years. He began serving Region Nine in 1999 and is currently the Chair of the Legislative and Communication Committee.

Juni is the longest serving Region Nine commissioner. He began serving in 1992 as a representative of Brown County Townships. He is the current Vice Chair of the budget and personnel committee. Juni served on the Milford Township Board for 40 years.

Retiring Region Nine commissioners, from left, Sleepy Eye Mayor Jim Broich, Milford Township Supervisor Fredrick Juni and Brown County Commissioner Jim Berg were honored Wednesday for their service to the organizatioBroich has served as Sleepy Eye’s Mayor for 30 years and joined Region Nine in 1997. He is a previous chair and currently serves as Chair of the Transportation Advisory Committee.

The three were asked what advice they would give to their successors.

“Everyone should get involved. That’s the best way to learn,” Broich said.Supervisor Juni said, “Don’t run for office just to run. Be committed.”Commissioner Berg said, “Listen and be able to answer people’s questions.”